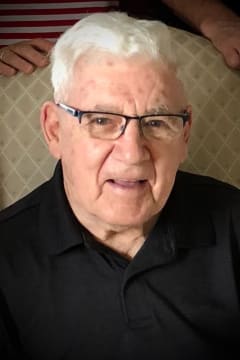 Clement A. “Clem” Farabaugh Jr., 94, of Patton, died peacefully at home on Tuesday afternoon, surrounded by his family. He was born September 16, 1927 in Carrolltown, son of the late Clement A. Farabaugh Sr. and Laverne (Thomas) Farabaugh. In addition to his parents, he was preceded in death by siblings Sylvia (Louis) Stoltz, Gloria (Joseph) Toskey, Clark R. (Margie) Farabaugh, Patrick (Mary Lou) Farabaugh. On November 15, 1952, in Patton, he married Eleanor Dunbar who survives him. He is also survived by children: Dr. Sharon (Joseph) Lacue, Patton; Clement R. Farabaugh (Tanya Brown), Huntington; Dr. Laura (Michael) Rizzo, Heilwood; twelve grandchildren Sara (Eric) Brannigan; Adam Lacue, Katelynn Farabaugh, Dr. Amanda Lacue (Cody Snyder), Hannah Farabaugh, Clement A. Farabaugh, Brendan Farabaugh, Beck (Skyler) Branton, Claire Farabaugh, Seth Farabaugh, Michael Rizzo, and Anthony Rizzo; two great-grandchildren and many nieces and nephews; and sister-in-law Mary Lou (Miller) Farabaugh. He was the last surviving member of his immediate family. Clem spent his life as a loving husband, father, grandfather, and great-grandfather. Clem was a graduate of Carrolltown High School. His lifelong special interest was being a jeweler and watchmaker. He owned and operated a jewelry store in Patton and worked at J.C. Penney in their jewelry department. Switching gears later in his career, he worked for the U.S. Postal Service, serving as postmaster in St. Benedict, Loretto, and Colver. Following his retirement, Clem became the official keeper of Patton’s town clock and enjoyed applying his creativity to many projects around his home. Clem was a member of Queen of Peace Church in Patton. He proudly served in the U.S. Army 45th Infantry during the Korean Conflict (1950-1952), was a member of the Knights of Columbus, American Legion, and VFW Post 779 Patton. The family would like to express gratitude for the wonderful care Clem received from UPMC Hospice nurses and caregivers. At the request of the deceased, there will be no public services. In lieu of flowers, memorial contributions may be made to the charity of your choice. Funeral arrangements are being provided by Stevens Funeral Home, Inc. in Patton. You may leave online condolences at www.stevensfamilyfuneralhomes.com or on our Stevens Funeral Home Facebook page.